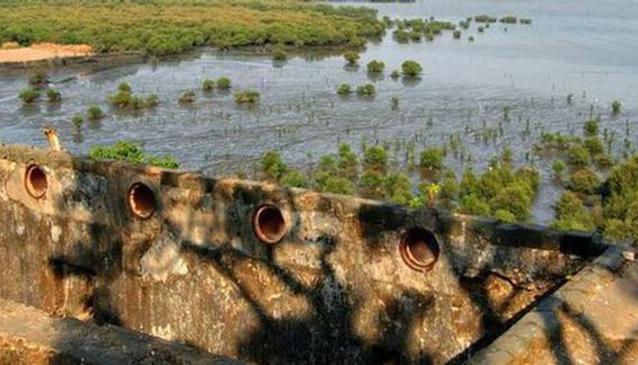 The Sewri Fort was built by the British in 1680 in Sewri in Mumbai as a check post. It stands on the island of Parel, on a hill overlooking the eastern seaboard and Indian mainland. It is bordered by high stone walls, including an inner ring for added protection. It is landlocked on three sides, and sits atop a sheer cliff of about 60 m. The entrance is a stone doorway that leads into a courtyard. To prevent a frontal assault from the main entrance, the inner entrances were placed perpendicular to the main entrances. The fort was subsequently used to house prisoners and later became port trust godown.

The fort was built primarily for defense. Its architectural highlights include pentagonal room along with a long domed corridor, and linear vaulted structures. A restoration work is presently underway at the fort to regain its lost glory.

The restoration involves the creation of two zones. Zone I includes the immediate fort area where a museum is also to be constructed. Zone II renovation consists of the surrounding areas that belong to the Mumbai Port Trust. In this, a sea-facing promenade is to be created that links the fort to the waterfront, along with the creation of a beautiful landscaped garden, food court, and amphitheatre.