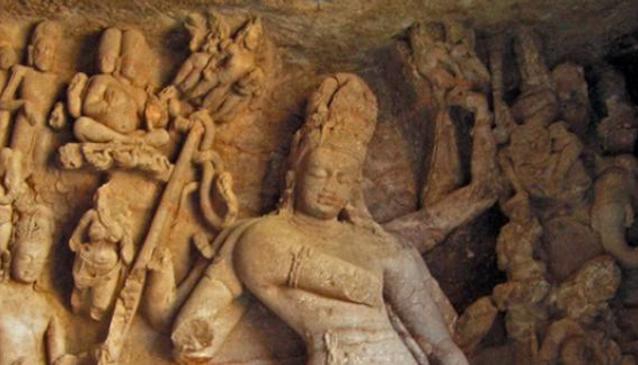 One of the major attractions of Maharashtra, the Elephanta Caves is situated near the metropolitan city of Mumbai. The Elephanta Island is located 10 km away from the Gateway of India. There are various rock cut temples present in these caves, which are as old as 5th century.

The Elephanta Island was named by the Portuguese, after the statue of an elephant near the landing area of the island. The temples in Elephanta caves are carved out of rock. There are columns, The entire temple complex at Elephanta is an architectural marvel made through an amazing rock removal technique. Actually, the entire temple is related to a large sculpture and you can walk through the corridors of this temple.

The caves are sprawled over a large area of about 60000 square feet. These temple caves consist of a main chamber, courtyards and several subsidiary shrines. There is also a mass of natural rock, above the temple. The site receives approximately 25,000 visitors per month. Public information brochures are also available at the venue of the monuments.

During the World Heritage Day on 18 April and World Heritage Week between 19-25 Nov. there are special events held at the caves. Another popular event organized is an annual traditional dance festival that attracts many visitors.

The magnificent image of Sadasiva, a manifestation of Shiva, is carved at the end of the north south axis. The stupendous 20 feet high image of the three headed Shiva, known as Trimurthy is a magnificent one. It is regarded as a masterpiece of Indian art. This huge image represents Panchamukha Shiva, whose only three faces are carved into the wall. Along with this image there are grand sculptured images of Kalyanasundara, Gangadhara, Ardhanariswara and Uma Maheswara on the southern wall. Other sculptured images of Nataraja and Hakaasuravadamoorthy are to the west of the northern entrance and the images of Yogisvara and Ravanaanugrahamurthy are to its east.

Elephanta Caves are open from 9 am to 5 pm on Sunday to Saturday . But Monday closed.